I few things I have learned:

Knives – Get the best you can afford, and stay away from stainless steel which cannot be sharpened.  “No Stain Steel”  is also a form of stainless (which I have just learned) but I have had good luck with them.  My most recent find is a ceramic knife I found in a discount store and I have been using it ever since. You really only need one good chef’s knife, a boning knife and a serrated knife for cooking – anything more is expensive and usually unneeded.

Pans – A wise person (Anna, do you remember?) told me before I got married to put money into a good set of pans and they will last so much longer than a less expensive set and will actually save money in the long run.  I listened, and still have my original pans (Revereware – stainless, copper core, called  Pro-Line. Not even sure if they make them anymore) and have gotten 23 years of great performance from them. Also essential is a large, seasoned cast iron frying pan. I bought mine at a flea market for $18 dollars (it’s a “Griswold”, ironically enough, and if you can find one by all means grab it since they also don’t make them commercially anymore.  These cast iron pans are slightly thinner and less heavy, therefore, you can have more control over the temperature unlike most cast iron pans) and washed it, coated it with crisco and left it in the oven at about 200 degrees for an hour then wiped out the excess. All  you need to do is wipe it out under some hot water after you use it and NEVER USE SOAP!!!! You can rub some oil in it, put it on a burner and heat until it slightly smokes and wipe out the excess  -scour with a brush only if food gets stuck. This pan is as good as any teflon pan that I own.  Good pans never have hot spots or bend when the heat gets too high.  They are worth the investment.

Seafood – If you do not really like fish it is probably because you have not had really fresh fish.  My understanding is that some supermarkets actually spray chemicals on fish in order to increase the shelf  life. My advice is simple: get it from a place that moves alot of fish – usually a fish market, buy only what you need on the day you are going to cook it, do not overcook it (take it out a little early and let it rest and it will continue cooking), it should not smell at all and it absolutely should not be slimy, dried out or yellow looking. Also, try and get to know the person behind the counter…they can give you the skinny on what is fresh and in season. My guy down in Westerly is great – always makes good suggestions and will often get me the better stuff in the back rather than what is in the case since I’m in there about once a week.  He also stocks alot of local stuff.

Veggies – Obviously, I love local veggies from the farmer’s market, but if you don’t have the time or feel it is an aggravation, don’t do it.  Supermarkets have perfectly acceptable stuff. But really, strawberries in January are not going to taste as good as strawberries in June. Buy veggies that are in season – you can usually tell as the market will have alot of them and they will be less expensive to boot (think asparagus in spring and root veggies/squash in fall and winter).  Don’t shy away from frozen ones, either. They are usually cheap, washed and frozen right after they have been picked so they retain their nutrients.  When you do not want to fuss for dinner just boil some pasta, take out some veggies, add olive oil, garlic and onion and you are all set in 20 minutes.

More to come as I think of it, so check in again soon! 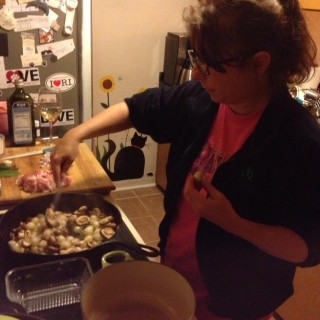 I have been an obsessed cook for the last twenty seven years. My infatuation started slowly, gradually widening my cookbook collection - and my hips, unfortunately! It all started with a new boyfriend who was interested in all natural, preservative and additive -free whole foods. After a few too many disasterous tempeh burgers and tofu pups, I was determined to find a way to make meals that he would eat that actually tasted good. It must have worked, because we are still happily married after all these years. It has been great to watch the evolution of cooking in America since that time, and the products that are now easy to pick up in your local supermarkets and farmer's markets. Now we have become more interested in travel and are finding inspiration everywhere we go.